Mary-Ann Gordon
Before I became pregnant with my first child, I knew very little about Sickle Cell Anemia- only that it seemed to be something associated more with the black community. I had never heard of anyone in my family having the disease, no friends or acquaintances either. My only frame of reference was that “T-Boz” of the popular 90’s female R&B group TLC had it. I remembered seeing her on The Oprah Winfrey Show talking candidly about being diagnosed with the disease later on as an adult and how that impacted her life. At the time, my ignorance did not allow me to grasp how debilitating the disease could be. After all, I told myself she was a beautiful, glamorous superstar so surely it could not be that bad.

At my seventh-month pregnancy check-up with my gynecologist, I was informed that I had thalassemia trait and that my spouse would need to be tested to see if he had any genetic traits that could lead to our baby being born with sickle cell disease. Like many Black Canadians, I had no clue I even carried any such trait. Long story short, her father tested positive for sickle cell trait. I was then told that my baby would have a 25 percent chance of being born with the disease. At seven months old, she was officially diagnosed as having sickle beta-thalassemia. It was gut-wrenching to hear. I remember feeling a sense of trepidation and uncertainty after leaving the doctor’s office. Overwhelmed by her diagnosis, questions immediately flooded my mind surrounding her quality of life. I began thinking about her mortality at the same time I had just been blessed with her in my life. I was fearful her adult life would be cut short drastically. I thought that her condition would diminish her ability to experience a well-rounded and meaningful childhood like other children. I tried to read and educate myself as much I could to understand how I could better take care of her and to prepare myself emotionally and mentally for when those eventual pain crises would occur.

By the time she was 4 years old, she had undergone a splenectomy, numerous blood transfusions, and hospital admissions to treat her for severe bone pain. Not to mention, she had experienced a silent stroke. Fast forward to today and I am happy to say that I am the mother of a vibrant nine-year-old daughter. She attends swim classes regularly, has had several sessions of soccer and gymnastics, competed in her first cross country meet last fall, and is setting her eyes on trying out for an event in track and field this school year. It is my belief that as parents it is important that we do not let our children be defined by their disease or be labeled or stigmatized by others’ perceptions of it.

Having a child with a chronic illness is extremely difficult. Sickle cell is life-long and life-threatening. Treatment is continuous as there is no cure. Even though her diagnosis has caused me to live in a constant state of hyperawareness and anxiety, I am extremely optimistic about her future. As her mother, I am teaching her to say in tune with her body, to eat healthily, and exercise all while learning to advocate for herself. Caring for Nevaya has been made easier through my maintaining close contact with her follow up care team and the various health care professionals at the SickKids Hospital.

What has also given me strength and the ability to cope is my connection to community groups such as the Sickle Cell Awareness Group of Ontario (SCAGO). Through actively volunteering with SCAGO, I have developed several relationships with other parents and sickle cell patients through our shared experience and understanding of the disease. It is a camaraderie that has enabled me to not feel isolated and alone despite being her sole caregiver. I would encourage other parents to actively become involved with SCAGO and other organizations so we can be proactive in advocating for a better universal standard of care for all sickle cell patients throughout Canada. A unified voice is always more impactful and resounding on those who hold the power to influence change in our healthcare system.

I am asking for a better and thorough education for the next generation of doctors and nurses, one that communicates the sense of urgency and understanding needed to treat sickle cell patients like Nevaya.

Sickle cell patients in crisis need urgent treatment from knowledgeable medical staff. Working together to spread more awareness will help to address the problems of follow up care teens experience during the transition in medical responsibility from their parents to themselves.

I am a single mother of two and a former secondary school teacher looking to embark on my second round of education through pursuing a Masters in Counseling Psychology. Nothing would fulfill me more than to further help and connect with those individuals and families within the sickle cell community with an emphasis on the teenaged population. Despite my daughter’s health challenges, I allow her to be the child she wants to be by making a conscious effort to not treat her differently despite her diagnosis. Her future is bright, she knows it and I know it too!

A message to the policymakers:
As a parent, I am calling for a universal standard of care in all hospitals across Canada, so by the time my daughter transitions, she won't be subjected to the same racial bias and discrimination adult sickle cell patients presently experience. Improvements in the emergency room experiences of adult sickle cell patients will be inextricably linked to the education, empathy, and understanding of the next generation of doctors and nurses. I know SCAGO will remain committed to fighting to see them happen. 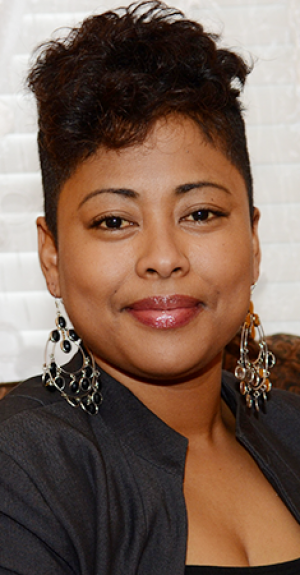 I was diagnosed with Sickle Cell Disease (SCD) in Guyana, South America when I was three years old. As I got older, SCD began to affect virtually all aspects of my life. I began presenting frequently in hospitals with numerous medical issues and various severities. For the sake of my well-being, close relatives and friends advised my parents that Guyana may not be the most medically advanced to support my care efficiently.

Thus, in 1995 my family migrated to Canada, and during the winter months, I experienced my first Canadian sickle cell crisis. As I was rushed to St. Joseph Hospital in Hamilton, we were all confident I would receive the best medical treatment from Canadian doctors whom we assumed to be well-trained and knowledgeable on SCD. My family was mortified to realize the physicians and nurses who cared for me knew very little about my disease. As a result, I was hospitalized for three weeks during which I felt like a laboratory rat.

Today, I am 40 years old and still do not have access to equitable care especially when I presented at the emergency room. My experience has been long waits before being provided with care and when I do receive care, it is due to someone advocating for me! It is always a fight to get the right care at the right time.

SCD is tagged as a disease of the Black and Brown people. To me, I am a Canadian and I have SCD and this makes SCD a Canadian disease.

A message to the care-providers:
People living with SCD seeking care in the Ontario emergency rooms are not drug seekers. They have real pain and need timely access to equitable care.

A message to the policymakers:
Individuals with SCD are an integral part of Ontario and a very important part! As a community, we are asking you to end hallway medicine. Best practices guidelines call for SCD treatment to start within 30 minutes of an SCD patient presenting in a hospital. While pediatric patients are promptly attended to, adults are most of the time left for hours unattended to- mostly due to being branded as drug seekers.

We need our policymakers to work with us and the SCAGO to bring about comprehensive care for SCD in Ontario! "

Sickle Cell Disease in the News

SCAGO2020-09-22T22:15:03+00:00
Share Magazine|September 3-16, 2020: Lanre speaks on Equity and SCD
Organized by the African Canadian Social Development Council (ACSDC), the Black Lives Matter rally held at the Nathan Phillips Square in Toronto on August 20th, 2020 presented an avenue for  SCAGO to shine more light on SCD and the system racism plaguing the disease. 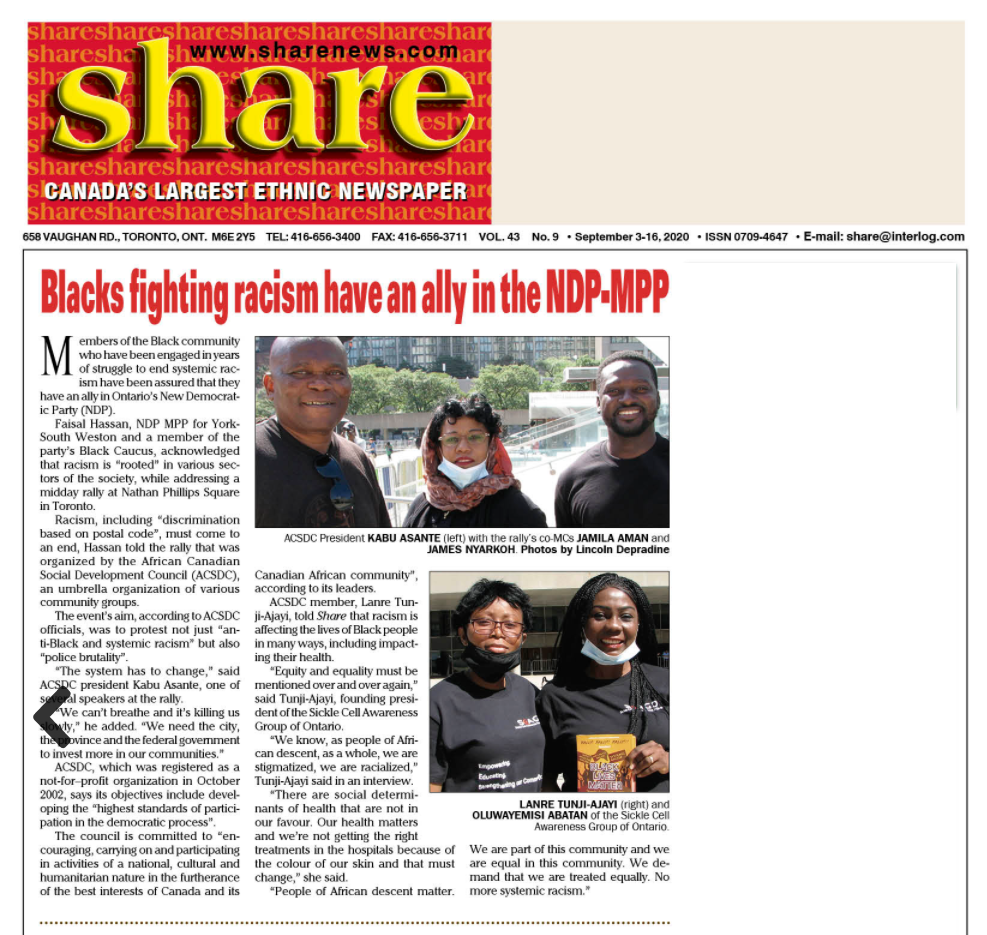 SCAGO2020-10-22T04:54:14+00:00
COVID-19 virus cases have started to take a sharp rise in Canada partly due to the colder Autumn weather. Dr. Melanie Kirby-Allen will provide us with amazing tips on keeping healthy and safe during this coming winter. Join us on October 24th to learn more about keeping well and safe.
To register for this webinar, click here  https://stayhealthyinwinter.eventbrite.ca

The Sickle Cell Awareness Group of Ontario is inviting you to donate blood and spread the word among friends, colleagues, and families. Register at: blood.ca with SCAGO's PFL#SICK327620 and go to your nearest Canadian Blood […]

This is a notice to the public that the Annual General Meeting of the SCAGO will hold virtually via zoom on November 21st, 2020. To attend, register at: https://agmofthescago.eventbrite.ca

Are you interested in learning about effective advocacy and/or improving your advocacy skills set? SCAGO is extending to you, an invitation to join our interactive advocacy training program to be […]

SCAGO2020-09-27T04:44:43+00:00
Blood transfusion is the main treatment option for some individuals with SCD and as such, it becomes important for peers and their families/caregivers to learn more about blood transfusion and support blood donor drives. Read more
Read more...

Guidelines for Clinical Management of Patients with SCD in Canada